Dr. Thomas Hargrove’s presentation was one of the most entertaining and enlightening talks we have had since we restarted HMAC 15 months ago. His talk was entitled “A Year in the Valley of the Shadow,” which recounted many of his experiences after being kidnapped by a group of FARC terrorists in Columbia. 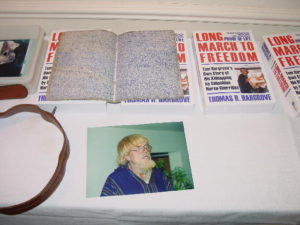 The photo includes his journal in which he kept a day to day account of his  ordeal. This diary was later published as a book entitled “Long March to Freedom” and it served as the inspiration for the movie Proof of Life starring Russell Crowe, David Morse and Meg Ryan. The above picture also shows what Tom looked like shortly after his release. The belt on the right is his money belt in which he secreted many of his daily diary entries. We had over 40 in attendance and the comments by some of the members in the audience made it clear it was going to be hard to top this meeting.