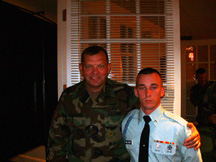 General Thurman (shown here with Private Brian Williams) indicated that as part of the Army’s transformation, it is migrating capabilities previously found with divisions and corps to the Brigade Combat Team or Unit of Action. These new brigades are designed to deploy/employ as independent units in support of joint forces. Used in combat as modular forces, these units are capable of operating across the entire range of military operations. They are rapidly deployable and enable the Army to support all of its strategic commitments.